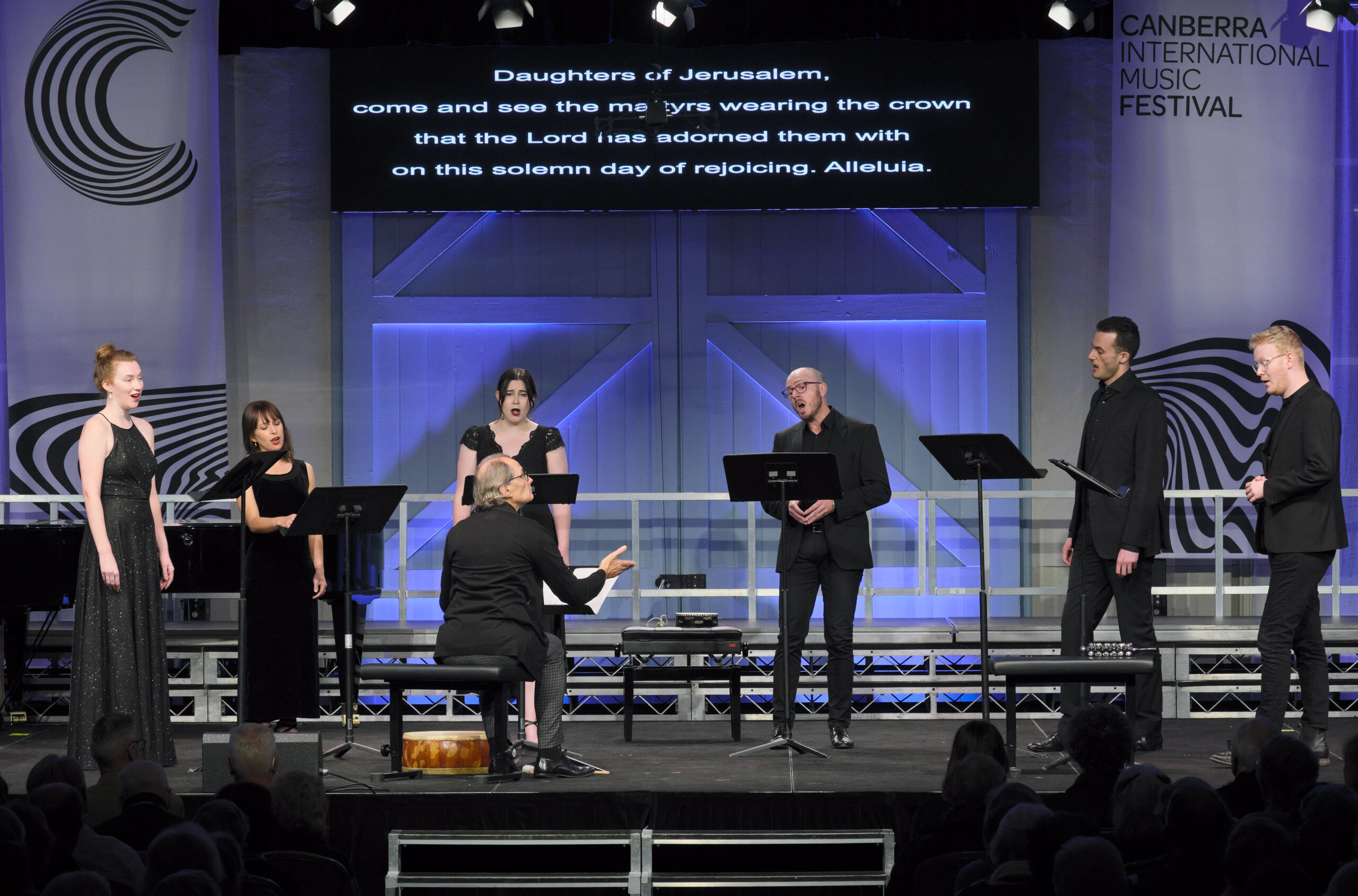 Wide-ranging program perfectly reflects Canberra Festival’s overarching theme, even if one did have to work to see the links.

Have you ever wondered how festival programs are constructed? Well, in the case of the 2022 Canberra International Music Festival, Artistic Director Roland Peelman has devised a series of 22 concerts and countless other smaller events, intending them to be “a walk through history with music from around the globe reflecting the polar opposites embedded in our planet and our humanity”. In this year’s CIMF program, Peelman’s “walk through music history” embodies reflection on geographic and cultural poles, as well as political and stylistic polarities. It’s a fascinating and high-minded construct, but one that seems to have left a few punters puzzled.

The puzzlement was clearly – if that’s the word – illustrated in the tenth concert, The Great Divide, which brought together early Spanish music, a solo piece by Steve Reich and a string quartet by Shostakovich. On paper, it looked fairly abstruse and unlikely but, as with many of Peelman’s more erudite constructs, it required considerable reflection to find the links between each segment.

Perhaps I was on the wrong path altogether. More than one person in the audience suggested we should just jettison any search for connections, and just enjoy the music for what it is.

Our ‘walk’ began on the Camino real of early Spain (not to be confused with The Kings Highway which connects Canberra with Bateman’s Bay on the NSW South Coast). Peelman’s exploration was mapped by a collection of nine short pieces from the 13th to 16th centuries, all vocal music for four to six voices, accompanied by occasional rhythm percussion, clapping and foot-stamping. The singers were a select group from the Luminescence Chamber Singers, a largely Canberra-based vocal ensemble which originated in 2013, now mentored by Peelman himself.

For some in the audience, this ensemble looked like The Song Company #2, which Peelman directed with singular distinction (1990-2015): six black-clad singers standing in a semi-circle, three females and three males, with Peelman directing them from a seat placed unobtrusively in front of them. Their sound was remarkably similar to their predecessors, beautifully blended lines in exquisitely executed polyphony.

“Between Ave and Eve is a great difference,” began the opening Cantiga by Alfonso X el Sabio (1221-1284). This set us along a path of songs (cantigas) in veneration of the Blessed Virgin and an implied contrast between Marian devotion and carnal love. The singing was luminous, with Peelman in familiar gestures drawing out a gentle tapestry of counterpoint. The contrast between the rugged terrain of the Camino de Compostella and the cheerless ambience of the Fitters’ Workshop was pronounced. Projections of that journey and imagery of its musical manuscripts would have been illuminating.

Still musing on the ‘polarities’ inherent in that early Spanish music, this CIMF travelogue transported us to the bustle of New York City in the 1980s. This past year, festivals and concert-givers the world over have celebrated composer Steve Reich, not quite 86 years old, and the singular role he has had in the creation of a musical identity for his home city.

His New York Counterpoint was composed in 1985, by which time the genre of East Coast Minimalism was well established. Scored for amplified clarinet in B-flat and tape (or 9 clarinets and 3 bass clarinets), it was a tour de force for solo clarinettist Jason Noble. To these ears, Noble, a leading figure in Ensemble Offspring, is Australia’s very own Richard Stolzman; the New York virtuoso premiered the 12-minute work some 37 years ago. Noble negotiated his pre-recorded multiple lines with utter assurance and verve, controlling his setting changes deftly with foot pedals.

Many in the audience were unfamiliar with the energy and layering of the multiple clarinet lines. It was good for them to realise that this feel-good corner-stone of American minimalism is no recent phenomenon: it was composed some 37 years ago!

The closing piece in this somewhat baffling program of time-travel took us back a further three decades to Soviet Russia and the height of the Cold War. Dmitri Shostakovich composed the sixth of his string quartets in 1956 (Coincidentally, this was the year that West Side Story leapt onto the Broadway stage, and Porgy and Bess appeared in Leningrad and Moscow under US State Department auspices.)

Shostakovich’s String Quartet No 6 in G, Op. 101, was premiered and recorded by the Beethoven Quartet, but it carries no dedication, nor overt hint of political manouevring. Some listeners can discern Shostakovich paying homage to predecessors like Alban Berg, Richard Strauss and especially his compatriot Sergei Prokofiev, who had the misfortune of dying on the same day as Josef Stalin (5th March 1953). Shostakovich acknowledges his friend and colleague in the third movement of his sixth quartet – a solemn passacaglia marked, simply, Lento – by quoting a passage from Prokofiev’s String Quartet No 2 in F, Op. 92 (1941). Someday it would be instructive to hear both quartets on the same program

On this occasion, CIMF featured the young Orava String Quartet who have gradually ascended the ladder of chamber music stardom. When they first appeared at CIMF in 2018, I predicted that they were “destined to become one of Australia’s proudest cultural exports”. And so, they have, with international touring, competition-winning and recordings. In 2018 the Brisbane-based quartet issued their first recording release on Deutsche Grammophon with a prize-winning program of Russian music, including a breath-taking reading of Shostakovich’s String Quartet No 8. A week before their CIMF appearance this week they recorded Shostakovich’s String Quartet No 6. They hardly needed reference to their parts; they had internalized this quirky and unsettled music deeply.

Their Shostakovich performances are more energized, more contrasted in moods and colours, more compelling and edge-of-seat than any I have heard in recent years. Certainly since the Shostakovich quartet cycle featured at the 1980 Adelaide Festival. For the Oravas, there must surely be a complete Shostakovich cycle for DG in the works? And, while on the subject of future projects, may I make a special request? For decades I have thrilled to Shostakovich’s Two Pieces for String Octet, Op. 11 (1924), for two string quartets, modelling the Octet of Mendelssohn.

Two of the Orava players are brothers – the violinist Daniel Kowalik and the cellist Karol Kowalik – and come from Polish heritage. Driving home from this concert, I passed the Ukrainian Orthodox Church in Lyneham. Throughout the world, major orchestras and festivals are re-scheduling programs to include the national anthem and a hauntingly beautiful nocturne from the Ukraine. By definition, Canberra is Australia’s national capital and this music festival prides itself on its international identity.

Over the years, CIMF, to its very great credit, has shown no sign of shying away from political commentary. The present conflict between post-Soviet Russia and the unified democracies of the world demonstrate the theme of this CIMF vividly. The polarities of the world are with us today with chilling consequences.